This is the third of a special series of guest posts by Sjors Martens, PhD student researching games and cities at Utrecht University’s departments of Media and Culture Studies and Computer Science.

We asked Sjors to report and reflect on a series of play sessions in which we iterated the Watergame further.

After three playtest sessions the Neighborhood water game has foregrounded different functions. Especially with the disaster scenario, the game worked best as a brainstorm facilitator. The game led to insights about water management not anticipated before. However, a reinterpretation of the rules also turned this game into a role playing game. Playing both an inhabitant and a service provider, the game turned players into stakeholders, cooperating to create actual plans to deal with water issues. The game in this case functions as negotiation tool. Still, the game has quite limited means for communal discussion. The many brainstorms or role plays were often undertaken from individual explorations, with other players merely feeding the stream of ideas.

With these initial findings in mind, the game was developed further. Designer Karel Millenaar created a new version of the game, taking it beyond its initial draw-and-talk nature. The game could systematically afford multiple scenarios while still keeping the gameplay organized. Aspects missing in the earlier versions, like the communal discussion, were specifically designed for as well. But what goal does this new version match? And more importantly: does it even work?

The game is now structured in three repeating phases and the scenarios are not predetermined anymore. Crucially, there are three piles of cards now:

First everyone gets three ‘thing’ cards, containing either a resource or a stakeholder and a number. These cards are used to create a basic scenario: someone invests in an ecological improvement using water and relies on some sort of resources to do something. The players, ordered according to the highest number on the cards, can now specify the italics by playing their cards and weaving it into a story. This way the playable scenario is formed, which may be slightly out-of-the-box. Everyone’s ‘thing’ cards are refilled to three and a new round starts. The player with the highest numbered card may now interpret the filled in scenario by turning it into a project and drawing it on the map. The other players may subsequently use their cards to react to this interpretation, weaving their card into the narrative. They can either aid or extend the project, thus helping the scenario along, or criticize it.Throughout the phases, players can discard one ‘thing’ card in exchange for an ‘effect’ card, disrupting and shaking up the gameplay by dislodging a resource from a project for instance. This way scenarios can be developed dynamically, giving each player the opportunity to contribute and interact. 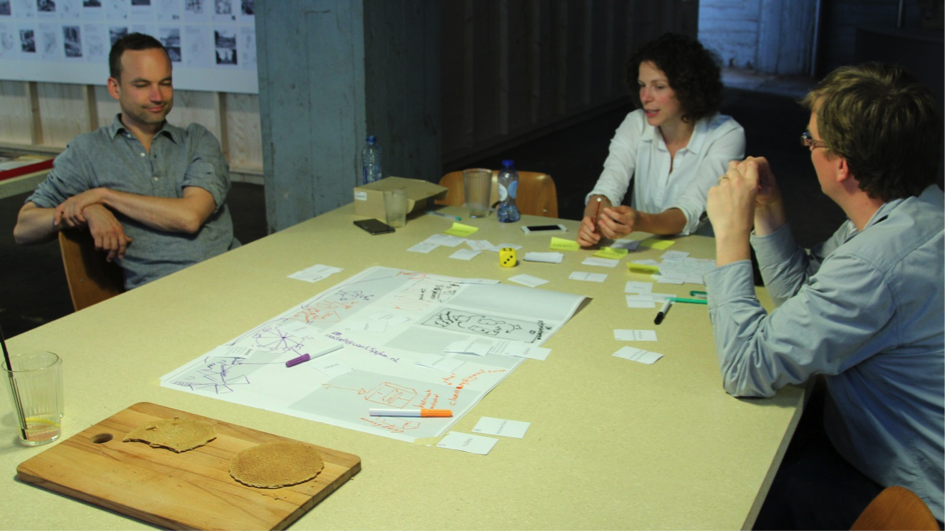 The goal of this game was still to be determined, which can mean only one thing: more playtests! Do people understand the new structure of the game? Do they like it? How does it relate to water as common pool resource? These are all questions that guided the playtest.

The playtest was held at the International Architecture Biannual Rotterdam (IABR), which is an event centering on the conviction that architecture is a public concern and which focuses on (the future of) the city. The Hackable city had a stand in the Fenixloods on the 29th of June where players could freely join in to play the game. Two sessions were held back to back with players versed in urban theory, media use, sustainability, and family therapy; a diverse turn-out.

Instead of just talking and drawing this playtest was structured through the use of cards. By starting from a scenario that all players have a role in defining, everyone has the same starting point, instead of their own plot of land threatened by water. The rest of the mechanics let players respond to each other’s played cards. The direct reactions contributed to more communal discussions about the scenario. The effect cards added more possibilities for the players to spice up or direct these discussions. Each player could now at least contribute something due to the cards offering some suggestions..

While the cards ensure that communal discussions related to the topic at hand occur, they also have some drawbacks. Playing cards is what develops the scenario. While during the playtest card-less discussions were also allowed, linking the progression of the scenario to cards severely limits the imagination. Brainstorming is now canalized into the possible narratives ‘contained in the cards’. This may still be imaginative – the resource ‘beauty’ is a show stealer for instance – but brainstorming becomes limited this way.

Instead the current mechanics and dynamics allow for a more competitive kind of play. Cards can direct the scenario to an idealised form, which might differ among players. Some ‘thing’ cards had stakeholders on them and these incited role play. The player holding the designer card would then sometimes try to alter the developing scenario to create a more elegant design; sustainability be damned. Effect cards gave players the capacity to really mess around with the dynamics, obstructing their fellow players or aiding a party in need. So this version of the game matches a different kind of engagement – a more competitive entertainment game. 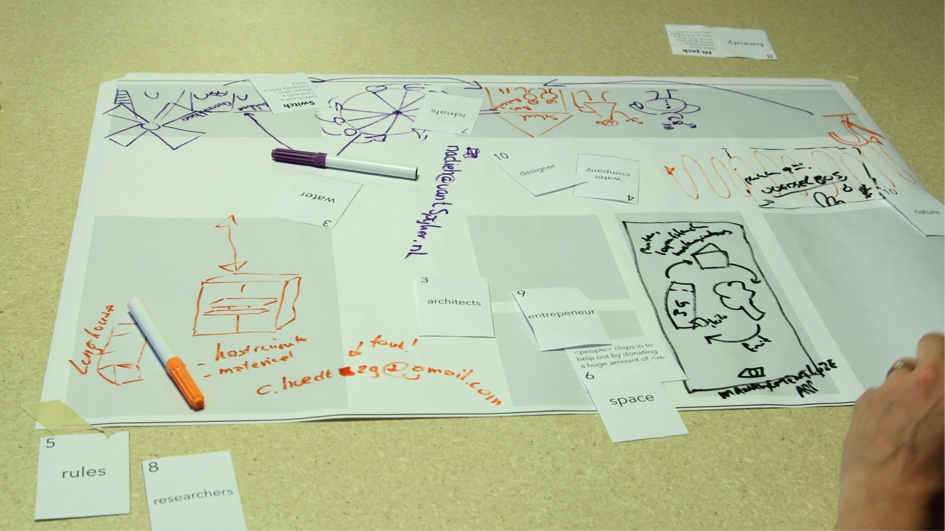 The game is thus suited to multiple purposes, fitting some more than others, but exactly what the goal is remains unclear. Even if the game is competitive, how the players can win is unclear. Several elements matched different goals, so the game definitely has potential. Three of these potentials could be identified but no definitive conclusions could be drawn which one best matches this game:

The game in its newest form was understood well enough. It could be played easily and by players from various backgrounds. The exact goal of the game remained elusive however.

What about the water?

Regardless of the gameplay, the goal of this game is linked to water as a common pool resource. This playtest showed however that the current form of the game loses its link to water. The more generalized scenario that gets defined through very diverse ‘thing’ cards directs attention away from water. In a way, the game redirects attention to urban planning on a larger scale, with water being just one of the means. This doesn’t mean this game is a bad iteration. Water can be thrown back into the mix by placing more explicit stress on it. This can be done in the scenario itself, the kind of ‘thing’ cards, the events that can specifically deal with water, and even the aesthetics of the map can be altered to already make water an entity on the map. All in all, this final playtest shows the beginnings of a formalized game that, like water, can still shape its course in many directions. 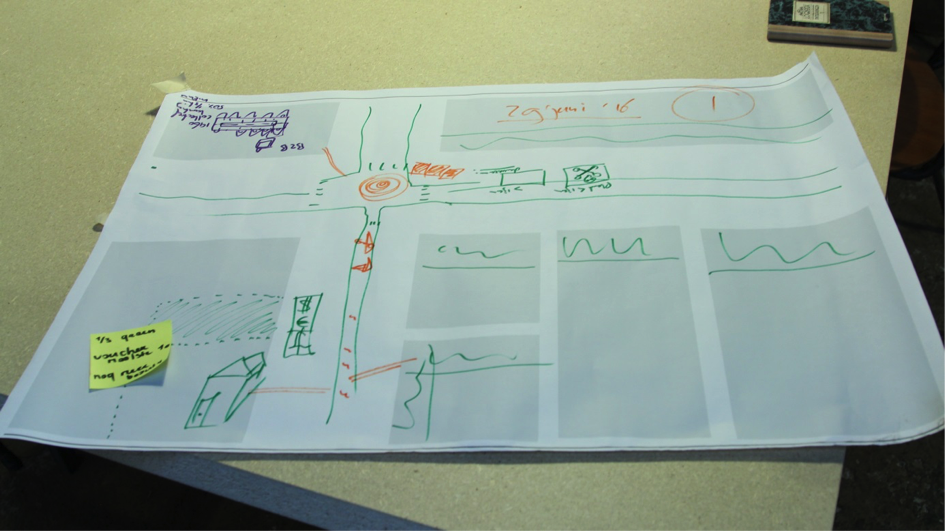 [1] Game Scholar Espen Aarseth introduced a useful distinction. He states that gameplay is built up of ‘semiotics’ and ‘mechanics’. Semiotics refer to the meaningful signs, or thematic content of the game. In The Neighborhood this means the actual narratives of city issues that may relate to real situations. Mechanics refers to the rules and functioning of the game, such as the card drawing and playing. When the mechanics become gain the upper hand the game is not played for its narrative or meaning anymore, but instead becomes a test of skill and strategy, seeing who can play with the rules best.
For more information, see: Aarseth, Espen. “Ontology.” In The Routledge Companion to Video Game Studies. Edited by M. J. P. Wolf and B. Perron. 484-492. London: Routledge, 2014.