This is the first of a special series of guest posts by Sjors Martens, PhD student researching games and cities at Utrecht University’s departments of Media and Culture Studies and Computer Science.

We asked Sjors to report and reflect on a series of play sessions in which we iterated the Watergame further.

Having turned the initial prototypes for turning water into a common pool resource into a game prototype, the specific capabilities of the game can be assessed. The game does not function as a “technological fix,” but what purpose does it then serve? Previous playtests used the input by water experts to come up with the card system that simulates different engagements with water. However, in the ultimate game the personae that informed the interaction were given a smaller role and so whether the players are water experts or not should not matter. Given the current form of The Neighborhood game, what kind of function matches this design? What are the purposes this particular game can best be used for.

These questions can be addressed by playtesting the game while focusing onthe guiding question of what issue(s) the current design of The Neighborhood match(es) best and how it should be changed to improve this match. Does the current design allow for several stakeholders to work together and come to real executable solutions? Or does it perhaps function best to make players think outside the box of every day water use, making it easier to conceive water as common pool resource? Such considerations have been shown to be partly influenced by certain choices in the design of the game [1]. Reflecting then specifically on what is afforded by the design and how this is played out during this playtest will foreground what The Neighborhood does best.

On Friday the 27th of May The Neighborhood was subjected to such a playtest, appropriately set at the green, sustainable campus of Fab City in Amsterdam bordering on the river’s edge. This playtest was conducted with six urban participators, most working in the area of Buiksloterham where the The Neighborhood is modeled on. In a one and a half hour timeframe several rounds had to be played in order to determine the players’ engagement with the new, less orchestrated, mechanics, to observe the dynamics that arose from the imaginative discussions, and to reflect on the players’ appreciation of the aesthetics. 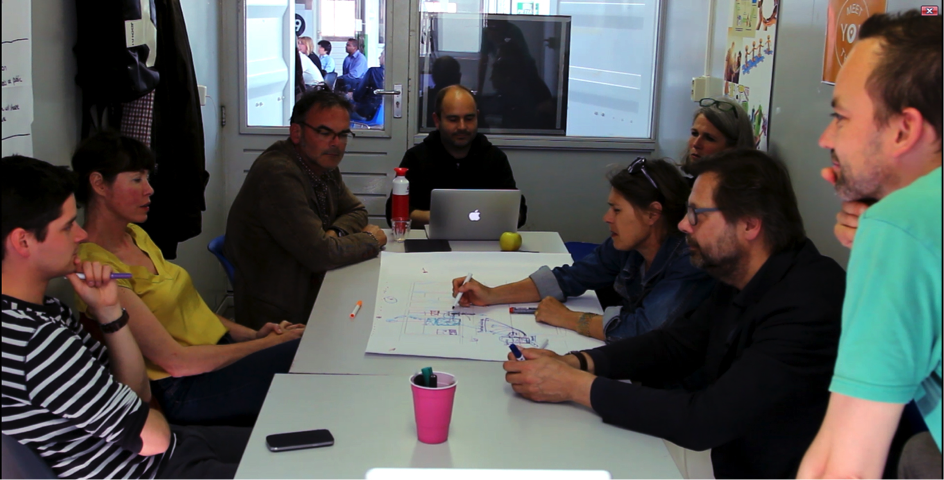 Figure: The setup of the playtest

Due to the shorter timeframe and the focus on what function or purpose The Neighborhood matches best, the largely random element provided by the playing cards was a disrupting element. Adapting to completely random events as provided by the cards takes up more time. More importantly though, when trying to determine the match between the purpose of the game and the design, a constantly changing purpose will not help. That’s why for this playtesting session, a singular, predetermined scenario was chosen placing the focus on the game affordances instead of the players’ adaptability. Whilst preset by the game master, in this case Michiel de Lange, the players were still unaware of what was going to happen.

For this playtest, the common pool resource nature of water was approached from a single direction: excess. The Netherlands has always flirted with an imposing waterline and as attested by the Watersnoodramp of 1953, there is a constant threat of flooding requiring precautions. Some of these precautions are government issued and large scale, like the Deltawerken, but on a citizen level several actions can also be imagined. These actions can be simulated in The Neighborhood. This perspective on water as common pool resource then forces players to reconsider water in its natural formative power and necessary management instead of a tasty drink. The game session consisted of four rounds:

The sessions flowed smoothly, with players bringing in real world examples from Buiksloterham to ground the game in reality. Simultaneously, some of the houses were shaped like beer mugs and one player benefited greatly from living on a boat with a little rubber boat business, so plenty of imagination was still present. Taking cues from the MDA model mentioned earlier, four key findings on the functioning and goals of this game can be distilled from this playtest. 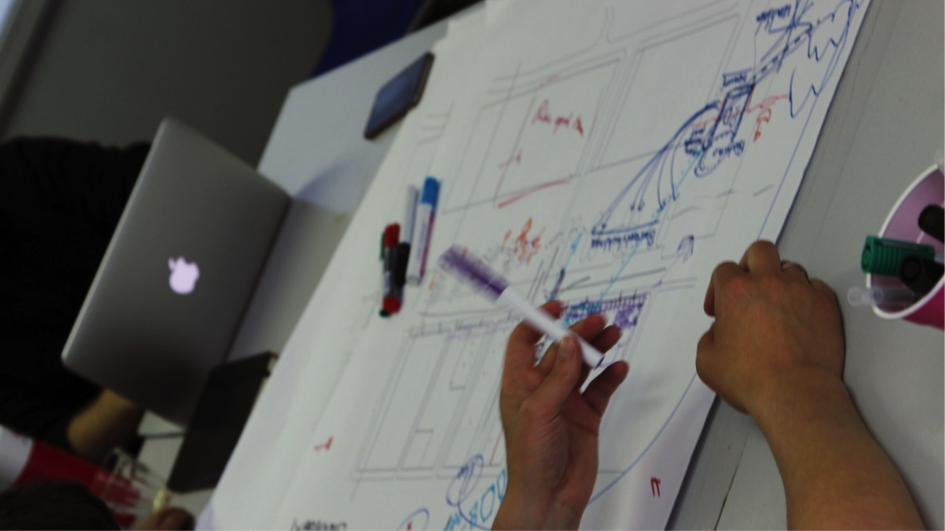 Figure: The playing field of the playtest

Based on these findings, the matching goal of the current version of The Neighborhood seems to be a Brainstorm Facilitator instead of, for instance, a role play facilitating existing projects. The loosely regulated imagination doesn’t work when trying to come up with concrete plans. Instead this imaginative nature allows players to explore the various aspects of water. Basically, players can think of aspects of water they didn’t think of before, such as the increased risk of toxic ground soil with rising waters in Buiksloterham or the responsibility of Buiksloterham to the rest of Amsterdam – they can’t just send their excess water downhill for that would endanger the rest of the city.

This use of The Neighborhood as brainstorm facilitator is complicated by some design aspects. The aforementioned visual similarity to Buiksloterham for instance restricted free imagination and the game didn’t utilize the brainstorm to make players reflect on their findings. To make the design better match the goal of fruitful brainstorm engine, the final long-term planning round could be changed into a reflection round. This phase would go back to before the scenario started. How would the players design their house and prepare differently, knowing what they know now? This change would make the game match its goal of a useful brainstorm engine more closely. This means keeping the focus of the game on playing, steering far away from a rule-heavy game.

In the next blogpost we’ll read more about alterations of the game matching different goals.

[1] Chad Raphael, Christine Bachen, Kathleen-M. Lynn, Jessica Baldwin-Philippi, Kristen A. McKee explain in ‘Games for Civic Learning: A Conceptual Framework and Agenda for Research and Design’ that, for instance, very structured games are best suited to deal with non-leadership roles while games wherein the player has lots of freedom is more suited to direct players towards leadership roles.