Reflection and iteration after play-testing round 1

From the first game iteration we concluded that the strength of a game lies in being a process tool to help turn water into a collective good, for which various stakeholders can assume certain responsibilities and roles. Through the game, stakeholders from their own interests started to reflect on water in relation to others. Games however are not magic bullets (what is called “technological fixes”, or “solutionism”). We felt that the water game should not juts provide answers or possible solutions to questions about water, but also raise questions and test hypotheses about hackable city making. Furthermore, the challenge is also to embed the game in a meaningful context: where/when to play, with whom, and who can adopt the game for their own purposes?

In the case of water the different parts of our hackable city model are totally static. Simply put, an institutional party like Waternet (at the far right end of the model) delivers services around water. Individual households (at the far left of the model) are the consumers. There are no collective practices around water (the middle part of the model). By making elements playable – stakeholder roles, resources, situations and context, rules and laws – the model can begin to flow. The point of departure is the Buiksloterham as a playing ground with institutional openness to innovation, an ethics of sustainability among individuals, and a need for community building. How can we turn water into a collective good (common-pool resource, CPR), as a way to make the current system around water as a non-CPR open and hackable? Our hypothesis is that by playing with water as a source of alternative values, people can engage with the notion of water as CPR, and envision concrete actions. The desired output then is that players will envision this potential, experiment with possible actions, and actually see themselves doing this.

To make that more tangible, we turned to the idea that water is not just a problem (too much rainfall) but can also be seen as a chance or resource for strengthening values:

Could we use the game to play out “what if..” scenarios around water, to aid in actualizing these or other processes? For instance, how can people build a giant water slide; or a distributed wetland park a la the Oostvaardersplassen using people’s combined rooftops; or a sustainable water cooperation similar to energy coops? How can the game make these wishes and values playable? Can we make the movement from the impact of water (mainly too much of it falling) for people’s own plot to collaborative city making with water as a resource? The focus of the game then would be on a proces of empowering people to make the water system “hackable”. Among others, games are instructive, teaching players how to achieve specific goals. Game also teach procedurality [1], allowing players to unpack existing systems. Games are ways to evoke people’s imagination: “could it be different?”. Game are ways to experiment with alternative actions: “how to achieve this differently?”. Games are occasions for trust building between stakeholders.

Crafting personae together with stakeholders

While continuing the work on the game concept, we met with Rainproof, in order to find out more about existing dynamics around water. Water is both a resource that can be subtracted into value (money, fun, social cohesion, ecology, etc.), and an event (too much rain, flooding, etc.). Interestingly, water is a hot potato that is passed on to someone else. For example in the case of heavy rainfall, the flooding of neighborhoods can only be combatted at the communal level of gardens and streets. However, when Waternet wants to install drainage systems in backyards, people themselves must organize permission from everyone to start digging, which turns out to be a difficult task. 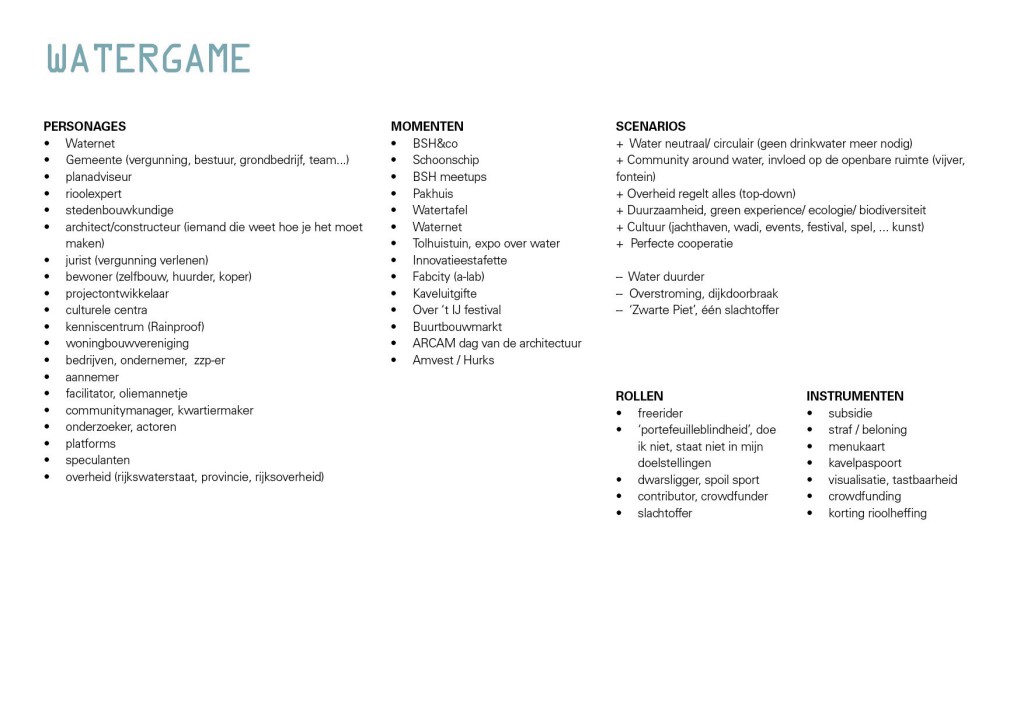 We decided to find out more about personas and how they are composed of elements like:

– Aims+motivation (what do you want? who are you?)

– Capacities (what can you do, e.g. skills, knowledge)

– Tendencies (what makes you tick, what moves you into a certain direction, e.g. emotional triggers, empathy)

We invited a group of stakeholders to provide further input, and help us identify and map the existing landscape around water. We identified a number of elements that could be incorporated into the game: personae, events, scenarios, roles, and instruments.

Making a new version of the game: The Neighborhood 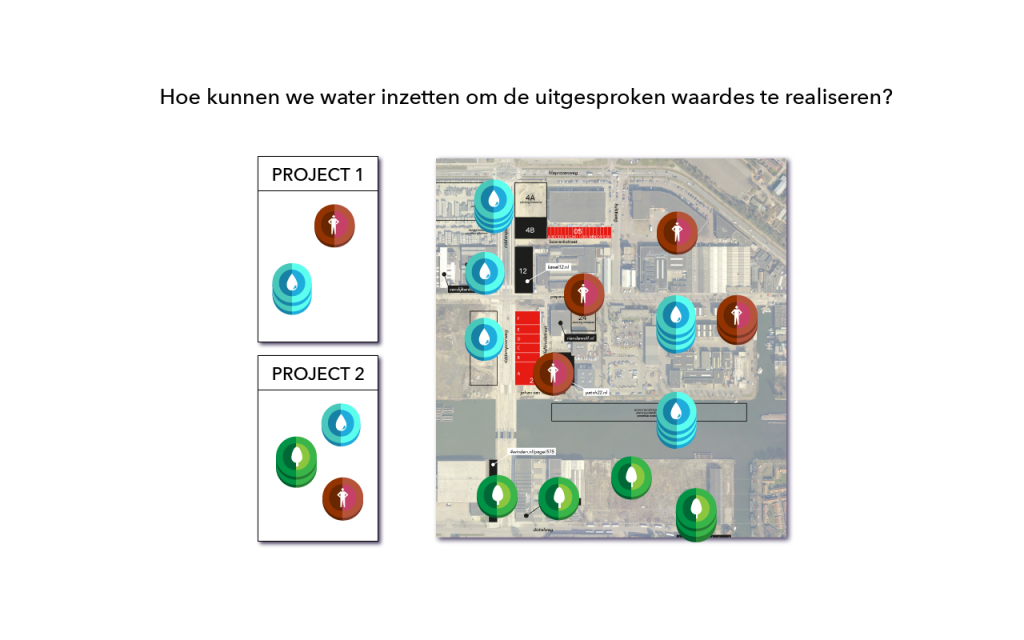 Using this feedback, Karel Millenaar developed a next version called The neighborhood. It is a cartography storytelling role playing game, inspired by the design of A Quiet Year. The game let players draw, define and tell stories of how their neighborhood changes and develops based on prompts given by event cards. The initial testing version was meant to see in what way this type of game be helpful for the directions we were exploring with the water game. Water has been defined as an environmental influence (rain, calamity) and an opportunity and resource. 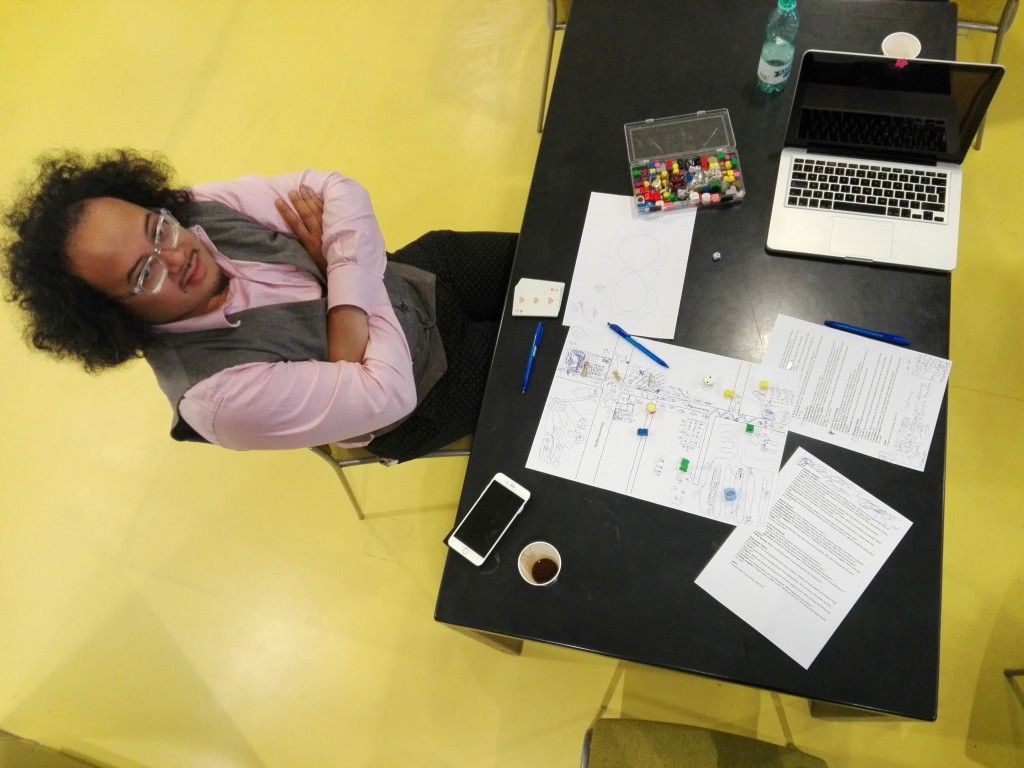 A minimum of 3 players sit around a map of the neighborhood (see picture). In 3 minutes players draw and tell some basic qualities of their persona’s and their household, like age, job, family, preferences, hobbies, and so on. In addition, people express certain values that are connected to the neighborhood. These can be things like clean neighborhood, socially pleasant, green, sustainable, safe, etc. These values are things players work on and develop during the game. Players then proceed to draw event cards from a deck of cards. Ideally the game should be played for about 5 rounds. 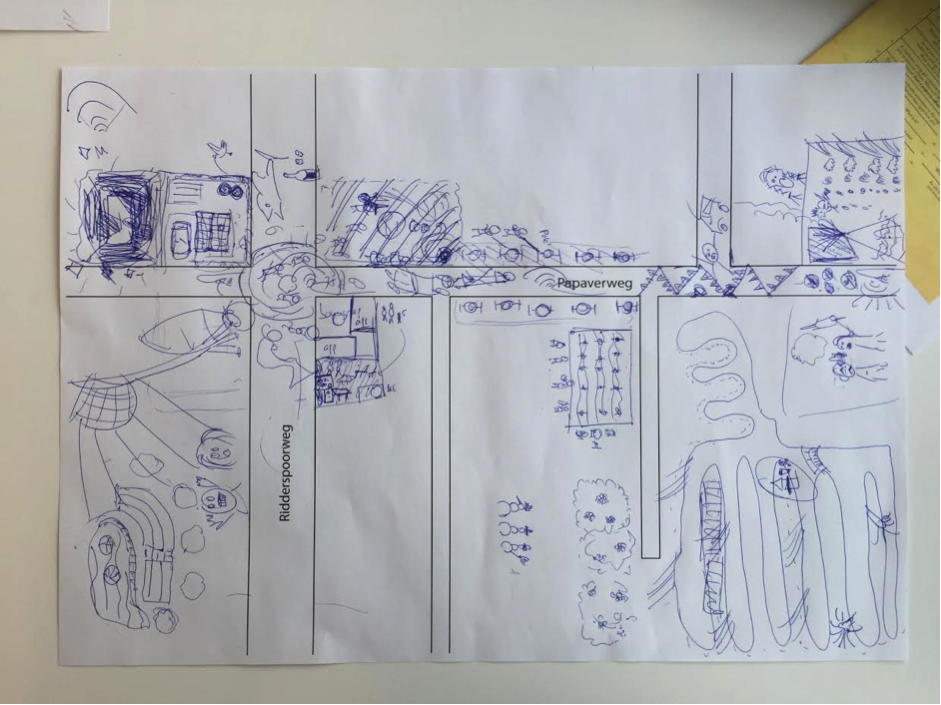 Figure: The emergent map looked like this, based on a few rounds with 3 players.

The game was fun. However, it seemed to lack a clear sense of direction and purpose: where are we going? How is this going to help make water into a CPR? An option could be to make each turn revolve around these relationships:

– Collective —> individual: What does this event mean for my individual plot or house?

– Individual —> collective: What can my plot/house mean for the neighborhood in his event?

– Institutional: What does this mean for the way the water system can be managed/governed as a collective platform?

We also decided that the scale needed to be even more micro in order to stimulate interactions between players. Whereas the affordance of a physical game board tends toward the localized, this might be different for a digital game in which matches rather than proximity may be the organizing principle.

<< Previous blogpost: First round of the Watergame

Up next: play-testing The Neighborhood game >>

[1] A useful notion here is Ian Bogost’s procedurality, which expresses the idea that games create, explain, and contain arguments that can be unpacked. Games afford persuasive and expressive practices, “procedural rhetorics”, that constitute claims about how the world works. For The Hackable City project this is useful because if you want to hack urban systems, like water, you first need to understand systems as being composed of procedures and conditions that can be remodeled.