One of the main themes in the research on Hackable Cities is the exchange of knowledge. How can individuals and collectives learn from each other and how can a collaborative knowledge base be established? Or as we have put in our Hackable City Research Manifesto:

“Hackable City Research Question 2: How can new media technologies assist in approaches of openness, collaborative learning and cooperation found in various instances of hacker culture – varying from Wikipedia to open source soft and hardware –to the process of city making?”

In the coming months I will be conducting research on this theme among the self-build community in Buiksloterham and also critically reflect on how I make use of digital tools in order to gain knowledge or share knowledge as a self-builder on the Monnikskapstraat. In this first blog post I will reflect on the tools that our community of self-builders has used so far.

Some challenges in developing a knowledge base for self builders is finding a pool of self-builders who are willing to put time and effort to share their experience and specific knowledge. The first questions which arise: What advantage does it have for the self-builders? What type of incentives would work and persuade self-builders to share?

Buiksloterham is an industrial area located in Amsterdam Noord. The municipality of Amsterdam had allotted pieces of land, which were not interesting for property developers and released them to private individuals. We took an option on a plot of land in March 2013. At that time, designing and building your own house was still less in demand. We came to know about it coincidentally via Funda, an online platform which presents the Dutch supply of real estate. With regard to the appearance of the houses there were no limiting conditions other than a fixed maximum volume. As a self-builder you assign most commonly, an architect and builder to design and construct your house taking the maximum volume into consideration. In addition to the freedom to design your own house it takes organizing and self-assembly skills, time and energy to build your own house. 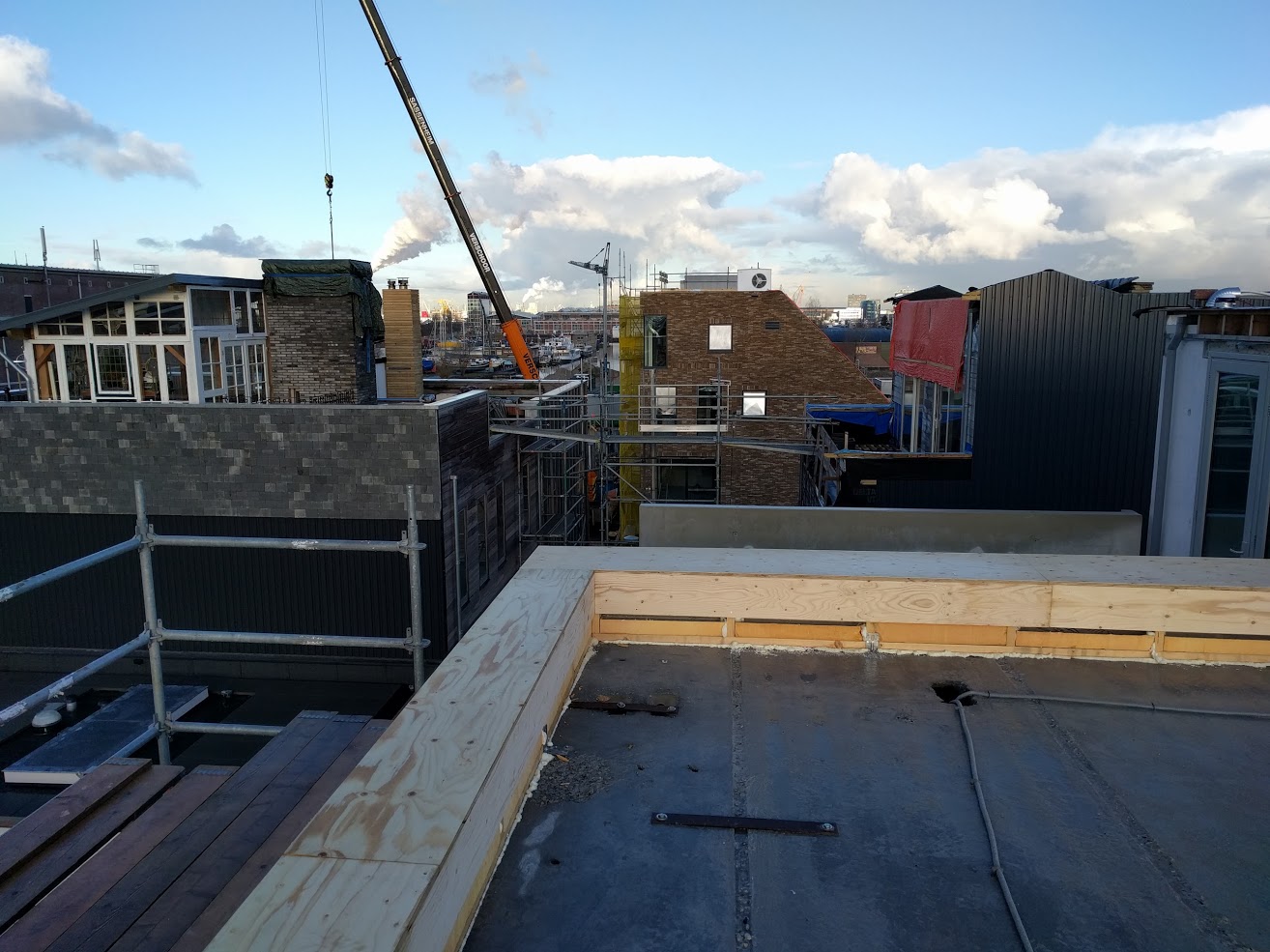 Knowledge exchange within the community

In the very beginning, the first self-build community, consisted of a few neighbours that had exchanged mail addresses. We met physically once in a while to get acquainted with each other, show our architectural designs and also discuss whether certain costs could be shared. Frank Alsema plays a significant role in processes like this in Buiksloterham. He is the driver behind many activities and initiatives engaging various stakeholders and citizens in dialogues, collaborations and events.

The first platform we used as a self-build community was Basecamp, a project management tool. We mainly used it to share knowledge and for collective actions, such as organizing a lawyer and pile driving. This tool was set up by Frank Alsema, as he had already experience and worked with the tool for his work. People can easily find back documents and share information.

There are other digital tools currently being used by the Buiksloterham (BSH) self-build community:

The website ‘Buiksloterham’ is an umbrella website, connecting people interested in the development of BSH. Events are shared, the people, and partners, and organizations involved in the development of the neighbourhood present themselves. There is also an opportunity to share ideas and wishes for the new neighbourhood. This platform comes closest to a bottom-up approach of city making. Creating a profile, starting an initiative, sharing information and connecting to others in Buiksloterham is very accessible. I use it to announce workshops, which I organize within the Hackable City research and also write blog posts as a field researcher.

Next Yammer is being used, which is a social network for businesses. It was set up by a resident. Among the self-builders it is used to share ideas, tips but also to plan pile driving. The following topics are addressed:

Facebook has three different pages related to self-building in Buiksloterham: 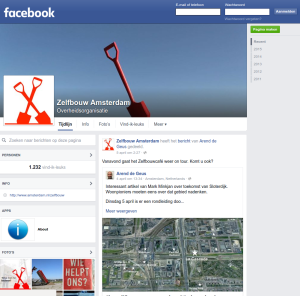 A Pinterest group was created to share ideas on the look and feel of the public park – Papaverpark. Pinterest was used, because images give a better idea, what people would like in their park. The images gave a direction to what most neighbors would like the park to look like and how it should be developed. We occasionally organized workshops together with the municipality on the design of the park, where we collectively decided the next design phase.

As a self-builder I notice that I mainly make use of mailing people personally for specific questions. At the very beginning of the process I actively made use of Basecamp, as we collectively had to take action. I believe that not Basecamp in itself may have supported us in our joint goal to organize pile driving, it could have been any platform. It was rather the goal to collectively organize the rammer and save money. Basecamp in itself is a user-friendly platform. Files can be shared, you can find back discussions, create to do lists, events can be posted etc. The tool was used at the very beginning, but once our joint mission had been accomplished it did not serve any purpose to continue sharing information. Everyone had started their individual project, with people being in different phases, building with various materials and also assigning it differently. Some being architects themselves, others designing and building the house completely themselves and others working with builders.

Regarding the BSH5 website, the reason that they are the only self-build street in Buiksloterham, who have taken the time to showcase their street in a simple, but effective way, needs to be investigated more closely. Was there someone responsible for collecting the information, or were the new residents engaged, and enthusiastic about the idea to invest their time and share their knowledge?

I joined Yammer, but it did not work for me, because it was yet another platform where information on self-building was shared, whereas I was already part of the Basecamp self-build community. Maybe if the communication on various topics had been shared via Basecamp, I would have been able to be participate more actively, it would have been a continuation of a particular tool for a specific project: building a house. Having to start sharing information on yet another platform was too much of an effort.

More personally, I am not too fond of Facebook, so for me following discussions on self-building via Facebook is not an option. Facebook in itself has a very low thresh-hold, almost everyone has a Facebook account, it is easy to connect, share photos, and links, one does need to know each other and still share relevant information. I do believe it is the easiest way to follow and share information related to self-building, “keeping your own identity, without being part of a commune” (as one of my respondents mentioned in a personal conversation).

In the beginning, I was also actively involved in the design of the Papaverpark. For this I set up a Pinterest, where future neighbors could share pictures and have an idea of the look and feel of the park. In order to get an idea what the majority of the neighbourhood’s wishes are regarding the park, I also conducted a small research, asking people to fill out a form. Pinterest worked especially well for this specific purpose, as all neighbourhood people could easily pin an image on the board appealing to them, ranging from the plants, flowers, paths, playground equipment, chairs, benches, swings etc. These images were shared with the landscape architect from the Amsterdam municipality together with the outcome of the small survey. This gave her a clear direction and start designing the park. We held several meetings, inviting the future neighbours around the park to give their feedback in the design process.

If something is happening, relevant for me, I come to know via Frank Alsema’s mails, who is active at various fronts within Buiksloterham. Many of the events organized by him, take place during working hours, so for many it is difficult to participate. The participants are often the usual suspects, people working as an independent and/or people from the municipality.

How did you fix this?

Currently I am in the building stage of our house, and I notice that interaction in informal meetings with neighbours has increased in order to understand how others have ‘fixed’ certain problems. As we all face similar problems, such as getting our water lines and electrical work installed. Everyone is working to finish their respective houses, the easiest way to find out, it to just walk by, talk, question, share and show.

The above examples show the emergence of digital communities, however ‘third places’ or the so-called informal and semi-formal urban spaces, such as the barber shops, bars and cafés are of equal importance for the contemporary liveability of cities. In our case this third place has already come to existence and that’s the park, yet to be built. You can find neighbours talking, sharing information, working, enjoying the sun, reading, while keeping an eye on their kids on improvised benches, tables and kids playing with each other using construction materials as playground.

The following months I will be conducting research in collaboration with the self-build community of Buiksloterham on how they use new media tools to share their knowledge and how to make this accessible for other self-build communities and local governments.