After the 2008 crash it became clear that the Dutch real estate sector was not very resilient. During this time of cancelled projects and collapsing house prices, citizen-driven real estate development proved to be an alternative model for the Buiksloterham area in Amsterdam. In this article Matthijs Bouw specifically discusses the Buiksloterham Hackable City project, which explores how digital technology can facilitate city making.

In the fall of 2015, on an improvised camping ground in Amsterdam-Noord, more than a hundred caravans and tents were set up. Their owners were willing to camp out for more than three weeks in order to sign up for a plot of land in the area – called Buiksloterham – on which they could build their own house, or, with a group of like-minded people, a small apartment building. While in line, the campers talked enthusiastically with each other about their individual dreams and speculated about the communal efforts that might be undertaken to lower costs or to increase sustainability. 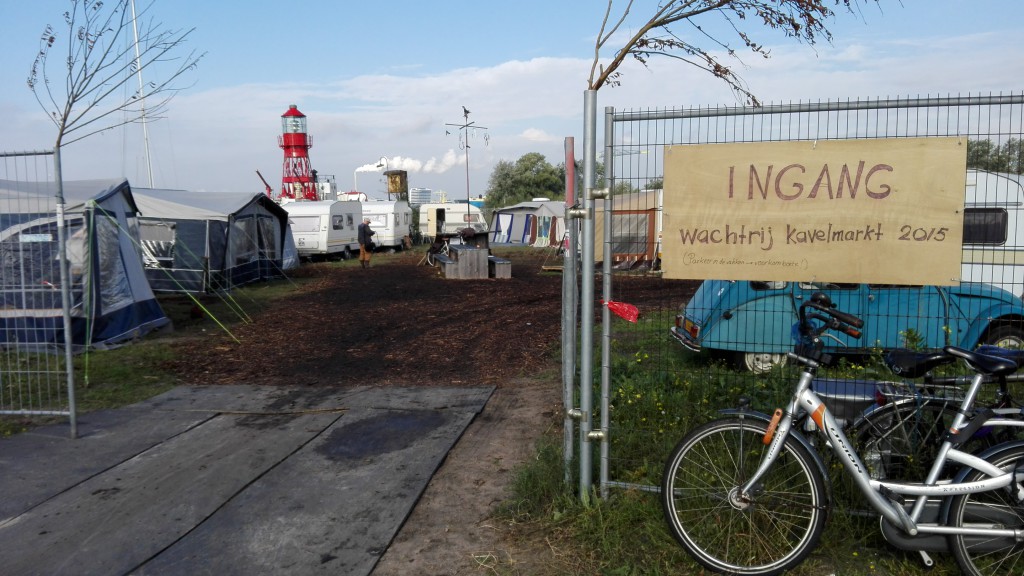 Quite a few people on the camping site were local architects who had been leading small development efforts in what had always been an unloved industrial area. They had been doing this since 2008 and now the end of the real estate crisis was in sight. In this period, they had built houses for themselves and for friends, nicely lined up in one unorthodox street, brought groups together and designed small apartment buildings for them, and experimented with soil remediation, sustainability and circular economies.

These pioneers had made Buiksloterham an exemplary case of resilience in the face of a real estate crisis. Resilience is the ability to deal with shocks, and stresses, and the ability to transform within critical thresholds. After the 2008 crash, it became clear that the Dutch real estate sector was not very resilient. Bloated and uncompetitive after decades of ever increasing liquidity because of tax policies and easily available mortgages, housing prices collapsed. This led to an extended economic downturn. Projects were cancelled and no new ones were undertaken, leading to a radical decline of the construction industry and the virtual disappearance of the real-estate developer, who was revealed to be not much more than a ‘mister 10 percent’ in the real estate value chain.

In Buiksloterham (as in a few other areas in the country, such as Almere and Deventer), citizen-driven real estate development proved to be an alternative model. Unlike the traditional development initiated by cities, developers and housing corporations, in which integral and ambitious plans were proposed (only to be either canceled or value engineered at a later stage), this development was based on simple urban plans in which individuals and groups could build their own houses or apartment building.

The reason this type of development continued during the prolonged real estate crisis was perhaps due to both the simplicity of the development model and, as a result, of the simple financing model, which to a large extent bypassed project finance loans, risk management committees, credit-board reviews and other manifestations of financialization.

This was real people building real houses with real money, occasionally with some help from their family or local architects.

While the traditional real-estate sector was largely unable to deal with the shock of the crisis, this more organic mode of development has proven to be much more resilient. In fact, it can even be argued that this way of development has a clear ‘resilience dividend’. The neighborhoods being developed are much more diverse than those which have been developed by ‘professionals’ because the range of people involved is much more diverse. Also the quality of the architecture tends to be much higher; this is partially due to a larger part of the total investment being actually spent ‘in stone’. The energetic performance of the buildings are better, because a period for earning back an investment of more than 10 years can still be acceptable. The floor plans (especially those of the ‘building groups’) are more flexible as people understand that life changes. The communities have organized themselves around the ‘circular economy’ with the reuse of local resources. Greater involvement of the people who will actually live in these buildings is, unsurprisingly, resulting in more loved neighborhoods. 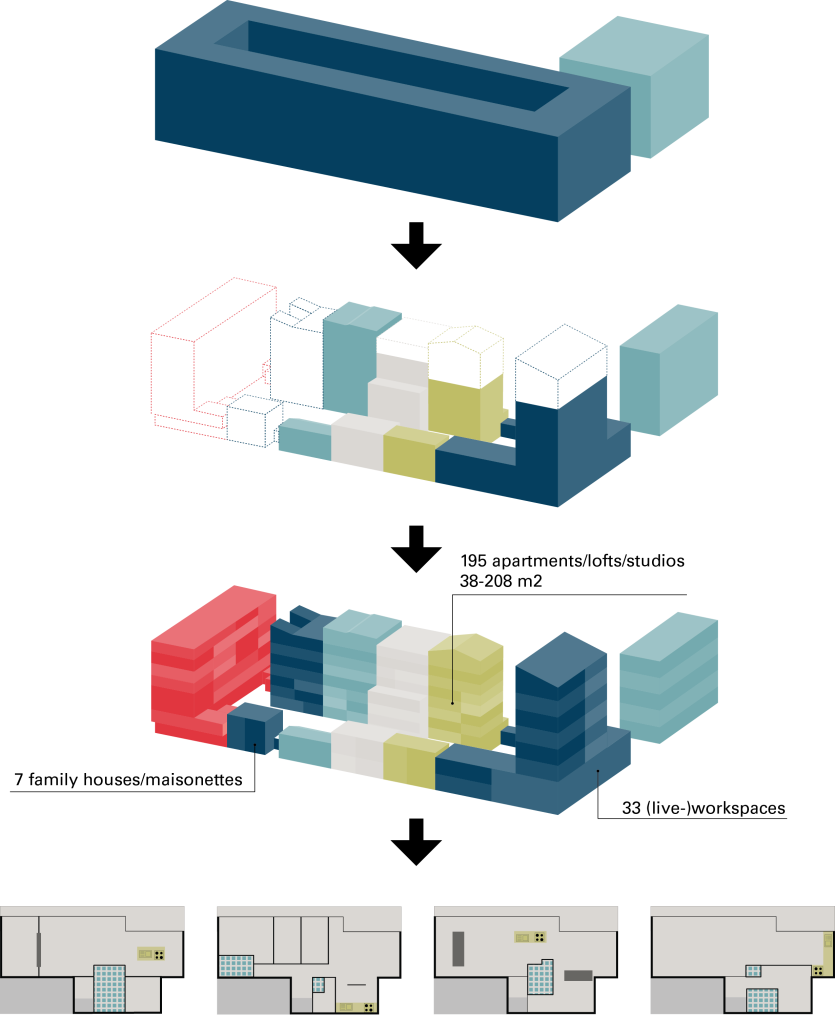 Many of the characteristics of the Buiksloterham brownfield transformation in Amsterdam-Noord, the most prominent of such organic developments, can be understood in terms of resilience. Resilience means engaging complex systems, such as a city, or the city making process, through multi-functionality, redundancy, modularization, embracing (bio and social) diversity, and by connecting multi-scale networks in such a way that the systems becomes adaptive.

The scale of development in Buiksloterham is small. Each project is driven by its own logic. There is little need for coordination. When one project stalls, the development of the neighborhood can just continue.

There is a focus on flexibility in the program and space, especially since the building groups realize that group processes are inherently dynamic. Through this piecemeal development, builders learn from each other and connect to each other to see if things can be shared, such as a heat pump or drilling of the piles. As such, the social fabric of the future community continues to strengthen and common values are adopted. The self-builder who constructs his houses from building material auctioned off by bankrupt contractors has much in common with the young architects who experiment with cleaning up contaminated soil with the use of plants.

Out of these initially individual experimental projects an ethos or culture has gradually emerged, in which early collaborations solidified themselves and other, more institutional actors became part of the ecology. A manifesto for a ‘Circular Buiksloterham’ was signed by some 20 different stakeholders, from self-builders to housing corporations to utilities. The architects who have worked with the ‘building groups’ jointly promote the area and themselves under the title ‘Beleef Buiksloterham’. One Architecture has teamed up with independent research group, The Mobile City and some universities in an action-based research project ‘Buiksloterham Hackable City’. This project has the goal of exploring how digital technology can facilitate city-making processes so that these become more accessible for individuals and collectives.

Slowly, the institutional actors started to develop projects with a distinctly Buiksloterham vibe. The housing corporation, De Alliantie, is developing ‘Cityplots’ as a diverse, mixed-use area with room for self-development and a high, circular ambition. Waternet, a water utility company, is working on a ‘bio-refinery’ as a decentralized waste management system. The architects have united in order to collectively explore if the lessons learned in Buiksloterham can be repeated on a larger scale, with the networks of other would-be Buiksloterhammers they have nurtured and in such a way that value can be reinvested locally.

If building resilience necessitates adaptive planning and design, the continuous prototyping of solutions makes city-making at Buiksloterham an iterative process.

While there is no master plan, and no master planner, local designers such as StudioNineDots, Delva Landscape and One Architecture ‘lead from behind’ by organizing the collective efforts so that new prototypes, often more advanced and at a larger scale than earlier iterations, may be developed.

One Architecture, first involved as architects and co-developers with a few building groups in Buiksloterham, is now Waternet’s consultant on the bio-refinery. Moreover, the ‘Hackable City’ research project they are part of explores and utilizes (digital) tools for organizing individual actors into learning collectives and for bringing about institutional change through collective action.

Sub projects of the ‘Hackable City’ include a system for sharing information by the individual self-builders, which allows the valuable knowledge gained in the process to be used by others, and a ‘water game’ that generates community awareness and solutions for water issues. Other projects include: a decision making system about when to adopt a centralized or decentralized approach to infrastructure development, a monitoring system that measures the performance of the building environment in order to create metrics which can be used to argue for institutional change, and a version of ‘Play the City’, a serious game for engaging various stakeholders. In addition to developing tools for city making and researching the possibilities for ‘hackable’ city making processes, the project also makes a strong case for Buiksloterham as a continuous ‘living lab’ where lessons learnt can be applied to future projects.

A new way of city-making

The prolonged real estate crisis where Amsterdam was bypassed by global capital, and the traditional actors remained passive or absent, has given rise to a unique new way of city making.

Buiksloterham has had enough time to develop a building culture and community that now makes it one of the most attractive and desirable Amsterdam neighborhoods.

Now that the local real estate market is bouncing back rapidly and global real estate capital has landed in Amsterdam, the Buiksloterhammers have a huge challenge ahead. The City, not the fastest learner about systemic risk, is inclined to ride the wave and go back to the ways of old, i.e. selling the area in large plots to big developers and in the process reducing sustainability requirements. This approach is based on the argument that houses need to be built fast enough to follow demand and comes with the added benefit of filling the city’s coffers. The local actors have to show their ongoing role in Buiksloterham, demonstrate how their organic method of development can adapt to booms and prove that their tactic of ‘hackable’ and ‘circular’ city-making is an essential ingredient of a resilient city.

If the Buiksloterhammers manage this new reality and find ways to establish their mode of city making, it will not only provide Amsterdam with the instruments to deal with the inevitable bust, but will also establish a powerful approach to city making that deals with real estate cycles and will be especially useful in those mid-size cities or real estate markets which are bypassed by global capital in the first place. It is often there, that the activation of local (social) capital through ‘hackable’ city making is crucial to livability and economic development.