The first round of play-testing was based on a concept called the Matrix Game. Matrix games offer the opportunity to construct roles, aims, and arguments. These together constitute player actions, and quickly lead to unpredictable outcomes. In the words of its creator Chris Engle “the methods are simple to learn and easy to play, but yield a nearly infinite variety of potential outcomes”.

It was played with a group of actual stakeholders in the area from Waternet, Rainproof, Play the City, Delva, and The Hackable City team.

We identified a number of stakeholders in the Buiksloterham area, and attributed them with certain qualities (that need not necessarily conform to reality). These roles in turn informed the arguments that players could make during the game.

The invited test players chose one of these stakeholders roles, and were seated around a board depicting the Buiksloterham area. Using a number of resources as stakes to play with, each could propose a specific plan for the neighborhood that matches their own interest, and see if they could mobilize the support of others. An umpire, game developer Karel Millenaar, presided over the session, and gave each proposal a number X in the range from 1-6 that reflected the likelihood of the proposal to actually occur. Players then had to use the dice to succeed (throw ≧X )or fail (<X) to realize their claim. We play-tested this game for two hours. 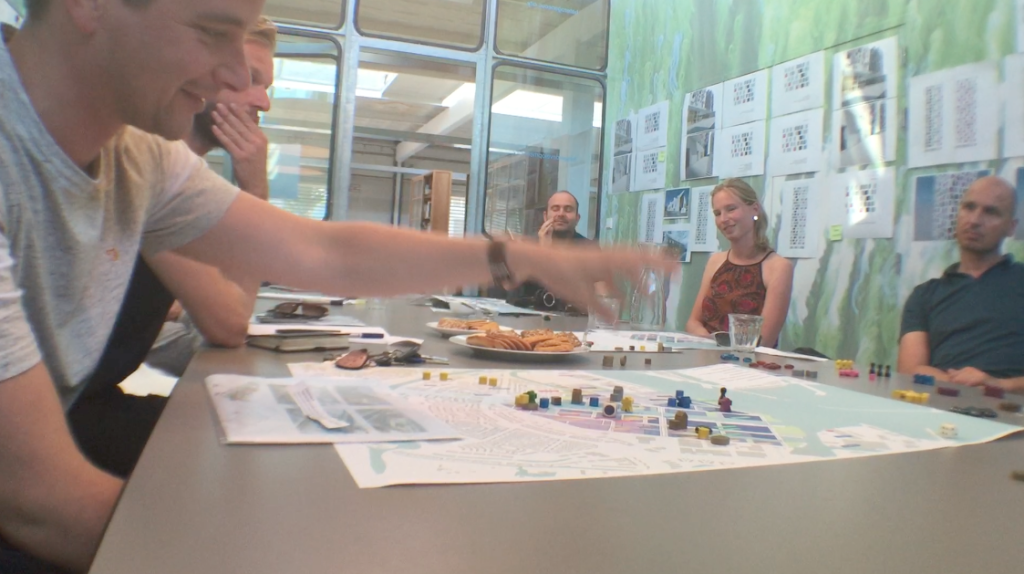 After the play-testing session the group of players reflected on the game together, and formulated several questions and lessons. These included issues like: was what exactly is “hackable” about this game? For who is this game interesting to play, and when/where? What end are we trying to achieve? How can you bring institutional diversity into the game, e.g. the many faces of a municipality?

We used the well-known MDA model (pdf; see also explanation in this blogpost) to evaluate the game, which consists of mechanics, dynamics, aesthetics [1]. In terms of its mechanics, we found the initial setting fairly complex. There were actually very few constraining rules to frame the game. It was not entirely clear in the beginning what was expected and what was allowed. The dynamics were intriguing, in that the multiple roles and rounds quickly produced an emergent kind of complexity into the game setting. Player interactions were mediated by the umpire, not emergent from the rules. We also observed spontaneous collaborations between players, for strategic reasons and for fun. In terms of the aesthetics, the game certainly was fun to play, as the interactions between the players often were unexpected, and imaginative and wild ideas were launched.

We concluded that the game indeed is a way to get a better grip of cities can be made hackable on all three levels of our hackable city model (explained further here, here, and in our publication). The MDA model mentioned above, and Katie Salen & Eric Zimmerman’s distinction between rules, interactions, culture, offers a productive view of how games can tease out hackability [2]:

1. Through their mechanics and rules games can help to open up alternative scenarios, and “what if..?” imaginations. How could cities work differently in the future? As rule-led systems games create an openness as a point of departure, and describe stakeholder positions and conditions, without determining the outcome beforehand. This corresponds to what we call hackability as the necessary affordance of cities to be open to alternative scenarios for the future, in order to be more resilient.
2. Game dynamics and interactions tease out emergent player dynamics and allow for role experimentation in a safe space. Stakeholder can hsift usual roles, and try out new arguments and modes of behaving. In addition, these dynamics foster create tinkering and problem-solving. This corresponds to what we call hacking as a praxis characterized by among others self-motivated improvisation and sharing of knowledge and self-organization. In doing so, cities may be places for social innovation.
3. Game aesthetics and culture release energy and fun among players, can offer exiting and valuable emotional experiences, a sense of ownership over one’s actions and collective outcomes, and may in the longer run foster changes in civic culture (which is Dutch historian Johan Huizinga’s argument about play being at the origin of culture). This is what we refer to the hacker ethic as an attitude of “can do” and intrinsic motivation. Truly smart cities are those that allow people to feel smart about themselves, and where they possess a sense of shared ownership over their environment as potential game changers.