Field notes on Building-groups: A new way of housing development in Buiksloterham. How to measure its performance?

Where in some countries the production of housing is dominated by DIY, in the Netherlands most of it is managed top-down, by local governments in cooperation with (private) developers. When this model came to halt due to the 2008 finance and real estate crisis, in Buiksloterham, a former brownfield area in Amsterdam Noord, a new model was tested.

Now a number of lots in the area were reintroduced as organic, citizen-driven real estate developments with self-building plots and plots assigned to small ‘building groups’ for the construction of medium sized apartment buildings. Exemplary of this shift, a plot (lot number 21) that was going to be developed by a single developer, was now split into six subplots, given out to six different building groups.

These building groups consist of the prospective apartment owners / future residents, and are usually managed by a contractors or an architect. Although each of these building groups developed their own building, cooperation between the groups also emerged. The architects who have worked with the ‘building groups’, together with plot neighbor Patch22 and Docklands, shared knowledge, connected to each other when things like energy provision could be shared and jointly promoted the area under the title ‘Beleef Buiksloterham’. 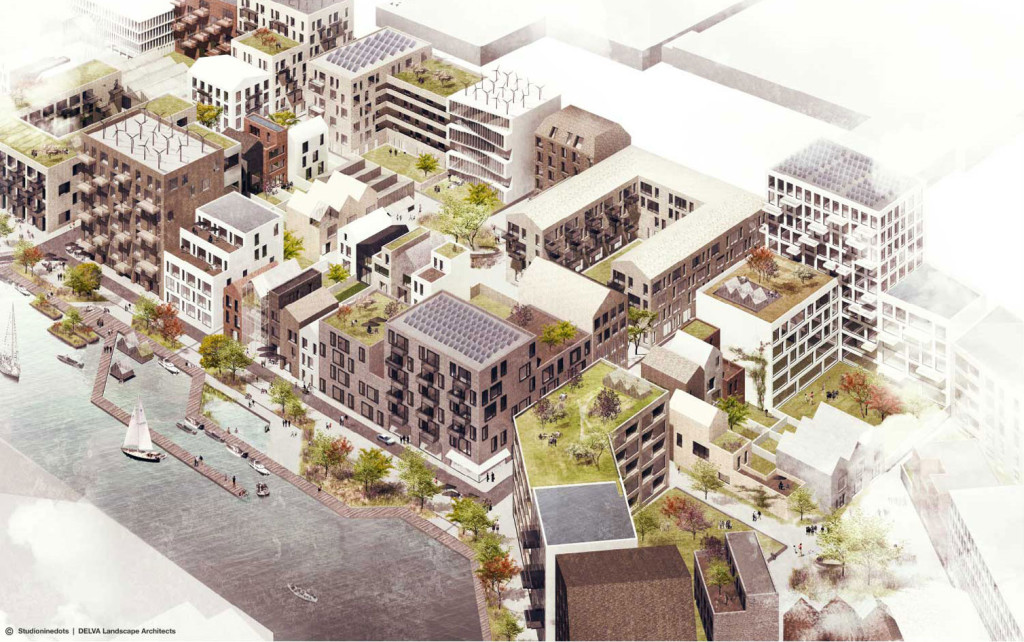 The leaders of these building groups describe their position as the ‘in between dimension’ (Tussenmaat)[1]. With regard to the scale of development, they find themselves in between large project developers and the individual self-builders. Similarly their proposition combines the advantages of both scales: they work closely with the future residents in the design of their projects, while also providing the certainty of professional guidance and funding. Residents are involved early on in the building process and gain a sense of ownership and commitment to their houses, their future neighbors and their neighborhood. As the scale of the individual projects is small and the architects are determined to working within the framework of the circular economy, these projects offer a lot of room for innovation. At the same time, as they have formed a network of building groups, taken together such a network can produce housing units at more or less the same scale as the traditional developer driven model.

Those are at least the promises of the model in which networked building-groups would develop parts of the city in concert. However, current regulations in allocation of lots make it hard for such networks to be eligible for collaborative development of new lots. So, how can the performance of these building groups be measured and presented to demonstrate that this new way of networked development is a viable alternative that produces high-quality sustainable buildings, an architecturally divers neighborhood and could contribute to the formation of social capital, as well as be attractive for individual residents, as they gain a greater sense of ownership over the design of their house?

[1] The definition and need of the Tussenmaat is studied earlier in a publication by Vincent Kompier, Marije Raap, Annet Ritsema, Nynke Jutten: Ruimte voor de Tussenmaat

In January some members of the Beleef Buiksloterham and Cityplot[2] team (STUDIONINEDOTS, BNB Architecten,  Frantzen et al architecten, Berger Barnett Architecten) gathered at the office of One Architecture to discuss the lessons learned of their projects so far and possibilities for more cooperative projects in the future. Much of the discussion was spent to understand and define the ‘product’. In what sense is the development through a network of small-scale building groups different, better or maybe equal to traditional building? Both to develop a future strategy, but also to take position with respect to a government that, as the market recovers, lapses too easily into the traditional methods. A negative image where their way of working is perceived to be slow, pricy and complicated compared to the efficient, streamlined and optimized process of the ‘Bouwfonds’.[3]

By gathering ‘hard’ and ‘soft’ measurable units (indicators) about the cost, sustainability, flexibility, diversity, speed, organization and risks of the different projects the Beleef BSH group tries to prove their strategy is equal and on some levels even superior than the Bouwfonds-method. The statement being that the value for money of Beleef BSH is much higher than of ordinary apartment buildings. Collecting these indicators is also a method to give institutions insight and enable them to write tenders in such a way that new processes such as these find their way into city planning in the Netherlands.

As pictured on the right hand side of the organization model for citymaking [picture above] that we use in The Hackable City research project, the point is to collect indicators demonstrating the results of the networked building-groups. This way of organization of collectives around the production of houses can be understood as a ‘hack’ of the traditional system. Now how can its methodology be sustained, and what kind of new institutional frameworks are needed for that? According to our model, such a shift should start by demonstrating the effects to local governments, to – provided the results are positive of course – they can learn from these new modes of housing production and build up an argument to convince law makers and policy officers to change their frameworks.

[2] Cityplot is a concept by STUDIONINEDOTS and developed further together with DELVA Landscape Architects. Cityplot combines self building with social housing, living with working, and collective building groups with investors. A dynamic process that moves along with changing wishes and needs. Together with market parties a dynamic masterplan is created to achieve a vibrant piece of Buiksloterham.
[3] The Bouwfonds Nederlandse Gemeenten (the Dutch Municipal Buildingfund), was a semi-public company that could easily borrow money to build affordable housing. From the Second World War onwards, the Bouwfonds is responsible for a large number of homes throughout the Netherlands.

The main issue is then what kind of indicators could be used to test this new model of housing development, and compare it with traditional and institutionalized ways of neighborhood development?

A short summary of the discussion during the workshop:

In the workshop it turned out that the comparison or performance was sometimes hard to express in quantifiable data. An alternative could be to look for detailed qualitative description of a small number of exemplary cases, rather than try to come up with averages. Some indicators that describe the economic situation like cost, speed and diversity are relatively easy to measure. The non-quantifiable social, cultural and political aspects (like flexibility, customer satisfaction and participation, risk management and an integral approach) needs to be illustrated in different ways.

Another issue that came up was the usability of traditional indicators that are often used in regulation frameworks around housing production. These indicators were found problematic as they are based on a number of assumptions in the model, whereas innovative or alternative aspects have found no place in these models yet. For example the Energy Performance Coefficient (EPC) measures the energy efficiency of a building, but without taking into account the living quality, the amount of daylight or environmental performance of material applications. Bluntly following the rules would lead to buildings with very small windows and lots of isolatable facades covered in PV cells. The building would be ‘sustainable’ only on the level of energy, but perform poorly in a more holistic perspective. Similarly, alternative ways for isolating a building, for instance by using windows with thick curtains rather than an isolated façade cannot be measured by the model.

The architects believe their area development approach of networked building groups will produce a higher quality of buildings and more loved neighborhoods. Factors that, according to them, will help to create resilient cities and communities in the future. In building their case for these types of planning and building the right examples need to be found and compared with traditional methods. Basically to find a way to compare ‘hard’ economics with ‘soft’ values.

At the same time they need to manage their own hard economics in finding a way to deal with participation in a manageable way. They consider their work as architects more interesting, but also more complex now that future buyers are part of the deal. Such a process costs money and will eventually lead to more expensive buildings – perhaps with more quality – but until what level are buyers able to follow? It is a balancing act to adjust the building to the group and the group to the building.

In the coming months we will design a framework to make the process hackable and incorporate quality, innovation and sustainability within tenders and projects. And also find a way to actually prove the performance on all levels. Next to studying literature we will seek help of experts during several design workshops.